“God made man, because he liked to hear stories” So they say the Africans”

I took my mom Gladys to see Hadestown, at the Overture Center last night, at the intermission while we both were enjoying a glass of red wine she told me “this play reminds me of my love story, because your dad had to suffer to win me over, he went to hell and back win my heart. We both were young and didn’t have much. In the end I said yes to him and yes to the adventure of love, thank God and his courage, your dad never gave up ” “I’m dying of suspense to see how this play ends” said mom smiling like a teenager, drinking her glass of wine.

“God made man, because he liked to hear stories” So they say the Africans, and the rich variety of worldwide mythology proves that God chose wisely.  Myths are stories that are based on tradition. Some may have factual origins, while others are completely fictional. But myths are more than mere stories and they serve a more profound purpose in ancient and modern cultures. Myths are sacred tales that explain the world and man’s experience. Myths are as relevant to us today as they were to the ancient. Myths answer timeless questions and serve as a compass to each generation.

There are so many beautiful tragic love stories out there including Romeo and Juliet, but one of my favorites without a doubt is the story of Frida Kalo and Diego Rivera.  There was definitely a deep feeling in their relationship. Fridas’s love letters speak of their sublime connection. “I love you more than my own skin,” she wrote. The great muralist was a changed man following the death of his wife in 1954. “Too late now I realized that the most wonderful part of my life had been my love for Frida.” Hadestown is a similar ill-fated love story of Orpheus and Eurydice.

Hadestown is an amazing musical tragedy, an old tale from back in the day. Narrated by Hermes, the Greek God of luck and travel playing at the Overture Center through January 29th, 2023

Hermes speaks to the audience as he brings together a troupe of performers over a contagious trombone beat and heart pounding guitar base.

Hadestown takes the 2,500-year-old ill-fated love story of Orpheus and Eurydice and sets it in a timeless science fiction imaginary society where everything is ravaged by industrial production (the violent impacts of an oppressive governor Hades in a post-apocalyptic landscape) which literally radiate upwards from Hell and assisted  by the gods of Greek mythology in this magnificent and captivating tale.

Here, Orpheus (Chibueze Ihuoma), who, according to legend, is the most talented bard in the universe, is a shy young musician bussing tables at a stop on the road to Hell. He has discovered a magical old melody he believes he can make into a song that will fix what’s wrong with the world. In addition to his divine musical abilities, Orpheus is also touched, Hermes says, by the gift of vision, the ability to see beyond what the world is to glimpse what it could be.

In contrast, Eurydice (Hannah Whitley) is jaded and exhausted by a life of poverty. Whitley’s voice is rich and clear, her performance a moving expression of anguish. For both young lovers is love at first sight, but still she needs to eat. Eurydice goes out to scavenge for food and gets caught in a terrible storm, during which Hades (Matthew Patrick Quinn), the king of the Underworld, successfully lures her into his merciless grasp. When Orpheus learns this, he immediately sets off to accomplish the seemingly impossible task of rescuing Eurydice from hell.

Hades has turned his dark kingdom into an industrial empire with mines, oil rigs, factories, and foundries, which he built to boot out the loneliness and jealousy he feels during his wife Persephone’s absence for part of every year. The goddess of spring, Persephone (Brit West), splits her time between the Underworld and the world above, and the seasons turn according to her presence or absence.

Although Hadestown takes place in a mythical time and place, the power relations of the story are drawn from our world and reality in the 20th century. The powerful profit from the stolen labor of the many, and the expansion of industry makes the climate increasingly extreme and inhospitable. To put this in context, quite similar to The Bracero Program when the United States signed the Mexican Farm Labor Agreement with Mexico.

Immigrant farm workers then suffered poor working and living conditions. And still to this day they continue to suffer. The many yearn for better working conditions and freedom of expression, which their overlords tell them, their demands will result in punishment. The working class is the enemy.

Hadestown renders these desolate circumstances in vigorous colors and design, which is visually pleasing and effective, using moving light fixtures to amplify the resonance of the show’s drama as well as the  most emotional moments. An innovative revolving center stage eases the long journey to hell and back, and a trap-shaped steel door upstage is the passage to Hadestown, swallowing up all who enter.

The cast performing in Madison features radiant performances by the principal actors as well as those of the rest of the cast. Whitley’s haunting turn as Eurydice is a perfect counter to Ihuoma’s soaring optimism as Orpheus, his gorgeous and piercing falsetto a perfect contrasting to Quinn’s bass (his bio says it all “he created several villainous roles for Disney Cruise Line as Scar, Jafar and Captain Hook”).

This production also features electric performances by Graham as Hermes and West as Persephone. West reprises the role of Persephone as the traumatized and conflicted goddess in a peridot light green dress. Peridot is the color of compassion.

Graham is magnetic, with perhaps the most animated expressions I’ve ever seen in a stage performance, his glowing silver three piece suit is sick. It’s a tragedy, they say at the beginning of the play, but the truth is that the ending is stunning, it’s an ending with a bang. Hadestown has a powerful message about love and courage. What should you do  when you love someone unconditionally and at the same time you live in a cruel world that is a lot like ours. Despite the tremendous fear and pain, the best option is to be brave, because being brave does not mean you are not afraid. Rather, being brave is facing that fear, finding a way to overcome it, and moving on. Never look back. Go forward!

How is your eye health? 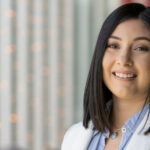